There is always someone in our families, in our church and in our community that carries the mother load of "negative nuggets" for anyone who will take time to listen. We have to purposefully keep those negative messages from our ears so that we do not make decisions in our life because of them.

I have seen my family, my church and my country suffer because of all the "negative nuggets" that have been allowed to infiltrate those who want to hear. 40 years prior to the scripture written above there were those who spread their "negative nuggets" to the Israeli people. They believed those who spread the negativity more than the God who had removed them from Egypt and helped them to cross the Red Sea. Because they chose to listen they were not able to enter the Promised Land for another 40 years.

Before we judge the carelessness of the Israeli people let's remember that we ourselves have done much the same thing. We believe the one's who spread rumors or those who are mean to others with their words more than those who are pure at heart. We have many times missed the blessings from God because of those we choose to listen to instead of the Holy Spirit within us or the Word of God.

The Israeli people were sent the direction of the Jordan River to get to the Promised Land and God once again removed the water so they could cross on dry land. How many Jordan Rivers in our life have we come to where we choose to believe the negativity of those around us and miss the blessings of God?

Here are some ways to eliminate those "negative nuggets" ~ eliminate much phone time unless it is an emergency and there are not as many of those as we think. I find that phone conversations ultimately lead to negativity. Eliminate much tv time and especially the news. Eliminate much time with those we know that spread their nuggets especially in jest and sarcasm because it causes the same damage to our minds and our decisions.

The best way for me personally to eliminate negative nuggets in my own life is to spend as much time with children as possible ~ they keep my mind uncluttered! 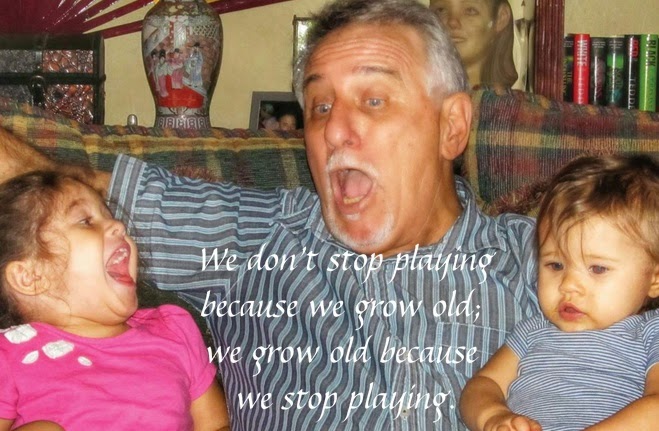 This quote was written by George Bernard Shaw. The picture was taken when my husband was watching and singing along to the movie "Frozen" with our grandkids.
Posted by Hurricane Empress at 2:49 AM