One of my favorite stories growing up in Europe was about Don Quixote. I thought it was true since I had visited as a little girl the windmills at La Mancha where the story took place. All over Spain there are statues, signs and people dressed up like Don Quixote. I collect them myself now and have my favorite prints by Picasso and Salvador Dahli. I also framed a picture I drew when I was a 6 years old of the windmills of La Mancha. The picture next to it I took of La Mancha in 2007 which appeared on Channel 25 news for several months as the favorite Vacation Picture taken summer of 2007.

Don Quixote had a friend named Sancho Panza who travels with him as be battles windmills, thinking they are giants. Sancho is a loyal friend even though Don Quixote has gone mental. Many things happen in their journey that defeat Don Quixote. When they arrive home, Don Quixote has a broken spirit and is put to bed. Being defeated in life he denounces his knighthood and dies with his friends along his side.

This story reminds me so much of life as we battle our own windmills thinking they are giants. Let's face it, those giants (people and problems) in life cause us to go a bit mental right? I am grateful for the Sancho Panza's in my own life who are there with me even when I'm mental. Friends and family with "love and loyalty" are a "safe place" after battling the giants in my own life!

John 15:13 Greater love has no one than this: to lay down one’s life for one’s friends. 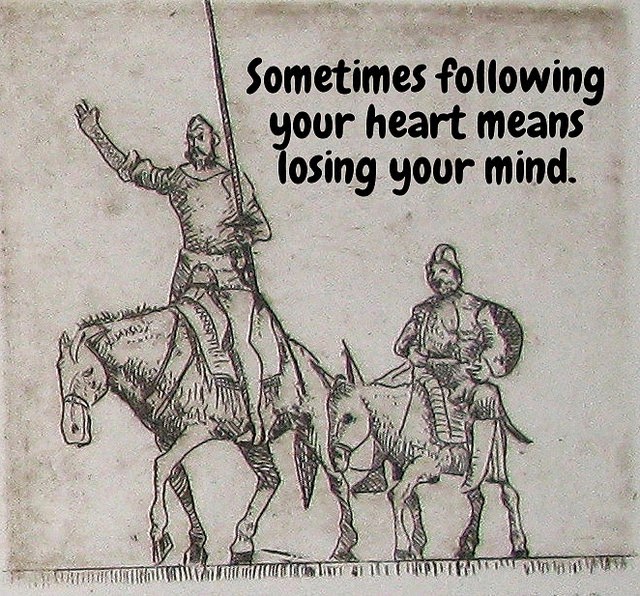 This is a picture of a sketch that I bought from a street artist in Madrid, Spain 2007.
Posted by Hurricane Empress at 7:15 AM